Before beginning your paper, you need to decide how you plan to design the study.

The research design refers to the overall strategy that you choose to integrate the different components of the study in a coherent and logical way, thereby, ensuring you will effectively address the research problem; it constitutes the blueprint for the collection, measurement, and analysis of data. Note that your research problem determines the type of design you can use, not the other way around!

The function of a research design is to ensure that the evidence obtained enables you to effectively address the research problem as unambiguously as possible. In social sciences research, obtaining evidence relevant to the research problem generally entails specifying the type of evidence needed to test a theory, to evaluate a program, or to accurately describe a phenomenon.

However, researchers can often begin their investigations far too early, before they have thought critically about about what information is required to answer the study's research questions. Without attending to these design issues beforehand, the conclusions drawn risk being weak and unconvincing and, consequently, will fail to adequate address the overall research problem.

Given this, the length and complexity of research designs can vary considerably, but any sound design will do the following things:

Each section below includes additional information that addresses the following:

The essentials of action research design follow a characteristic cycle whereby initially an exploratory stance is adopted, where an understanding of a problem is developed and plans are made for some form of interventionary strategy. Then the intervention is carried out (the action in Action Research) during which time, pertinent observations are collected in various forms. The new interventional strategies are carried out, and the cyclic process repeats, continuing until a sufficient understanding of (or implement able solution for) the problem is achieved. The protocol is iterative or cyclical in nature and is intended to foster deeper understanding of a given situation, starting with conceptualizing and particularizing the problem and moving through several interventions and evaluations.

A case study is an in-depth study of a particular research problem rather than a sweeping statistical survey. It is often used to narrow down a very broad field of research into one or a few easily researchable examples. The case study research design is also useful for testing whether a specific theory and model actually applies to phenomena in the real world. It is a useful design when not much is known about a phenomenon.

Causality studies may be thought of as understanding a phenomenon in terms of conditional statements in the form, “If X, then Y.” This type of research is used to measure what impact a specific change will have on existing norms and assumptions. Most social scientists seek causal explanations that reflect tests of hypotheses. Causal effect (nomothetic perspective) occurs when variation in one phenomenon, an independent variable, leads to or results, on average, in variation in another phenomenon, the dependent variable.

Often used in the medical sciences, but also found in the applied social sciences, a cohort study generally refers to a study conducted over a period of time involving members of a population which the subject or representative member comes from, and who are united by some commonality or similarity. Using a quantitative framework, a cohort study makes note of statistical occurrence within a specialized subgroup, united by same or similar characteristics that are relevant to the research problem being investigated, rather than studying statistical occurrence within the general population. Using a qualitative framework, cohort studies generally gather data using methods of observation. Cohorts can be either "open" or "closed."

Cross-sectional research designs have three distinctive features: no time dimension, a reliance on existing differences rather than change following intervention; and, groups are selected based on existing differences rather than random allocation. The cross-sectional design can only measure diffrerences between or from among a variety of people, subjects, or phenomena rather than change. As such, researchers using this design can only employ a relative passive approach to making causal inferences based on findings.

Descriptive research designs help provide answers to the questions of who, what, when, where, and how associated with a particular research problem; a descriptive study cannot conclusively ascertain answers to why. Descriptive research is used to obtain information concerning the current status of the phenomena and to describe "what exists" with respect to variables or conditions in a situation.

A blueprint of the procedure that enables the researcher to maintain control over all factors that may affect the result of an experiment. In doing this, the researcher attempts to determine or predict what may occur. Experimental Research is often used where there is time priority in a causal relationship (cause precedes effect), there is consistency in a causal relationship (a cause will always lead to the same effect), and the magnitude of the correlation is great. The classic experimental design specifies an experimental group and a control group. The independent variable is administered to the experimental group and not to the control group, and both groups are measured on the same dependent variable. Subsequent experimental designs have used more groups and more measurements over longer periods. True experiments must have control, randomization, and manipulation.

An exploratory design is conducted about a research problem when there are few or no earlier studies to refer to. The focus is on gaining insights and familiarity for later investigation or undertaken when problems are in a preliminary stage of investigation.

The goals of exploratory research are intended to produce the following possible insights:

The purpose of a historical research design is to collect, verify, and synthesize evidence from the past to establish facts that defend or refute your hypothesis. It uses secondary sources and a variety of primary documentary evidence, such as, logs, diaries, official records, reports, archives, and non-textual information [maps, pictures, audio and visual recordings]. The limitation is that the sources must be both authentic and valid.

A longitudinal study follows the same sample over time and makes repeated observations. With longitudinal surveys, for example, the same group of people is interviewed at regular intervals, enabling researchers to track changes over time and to relate them to variables that might explain why the changes occur. Longitudinal research designs describe patterns of change and help establish the direction and magnitude of causal relationships. Measurements are taken on each variable over two or more distinct time periods. This allows the researcher to measure change in variables over time. It is a type of observational study and is sometimes referred to as a panel study.

This type of research design draws a conclusion by comparing subjects against a control group, in cases where the researcher has no control over the experiment. There are two general types of observational designs. In direct observations, people know that you are watching them. Unobtrusive measures involve any method for studying behavior where individuals do not know they are being observed. An observational study allows a useful insight into a phenomenon and avoids the ethical and practical difficulties of setting up a large and cumbersome research project.

Understood more as an broad approach to examining a research problem than a methodological design, philosophical analysis and argumentation is intended to challenge deeply embedded, often intractable, assumptions underpinning an area of study. This approach uses the tools of argumentation derived from philosophical traditions, concepts, models, and theories to critically explore and challenge, for example, the relevance of logic and evidence in academic debates, to analyze arguments about fundamental issues, or to discuss the root of existing discourse about a research problem. These overarching tools of analysis can be framed in three ways:

Sequential research is that which is carried out in a deliberate, staged approach [i.e. serially] where one stage will be completed, followed by another, then another, and so on, with the aim that each stage will build upon the previous one until enough data is gathered over an interval of time to test your hypothesis. The sample size is not predetermined. After each sample is analyzed, the researcher can accept the null hypothesis, accept the alternative hypothesis, or select another pool of subjects and conduct the study once again. This means the researcher can obtain a limitless number of subjects before finally making a decision whether to accept the null or alternative hypothesis. Using a quantitative framework, a sequential study generally utilizes sampling techniques to gather data and applying statistical methods to analze the data. Using a qualitative framework, sequential studies generally utilize samples of individuals or groups of individuals [cohorts] and use qualitative methods, such as interviews or observations, to gather information from each sample.

Presented by Navigating the Doctoral Journey. Although tageting doctoral students, master's students doing their thesis/capstone research will find it of use as well.

A "soup-to-nuts" presentation. Long, but worth the viewing time!

[Video description] "This video is a one-hour lecture that Roberta E. Goldman, PHD delivered as part of the Harvard Catalyst lecture series in 2011. The lecture presents an overview of qualitative research methods that can be used in combination with each other, and in combination with quantitative methods for mixed methods primary care and public health study designs."

The research design establishes the decision-making processes, conceptual structure of investigation, and methods of analysis used to address the central research problem of your study.

Taking the time to develop a thorough research design helps to organize your thoughts, set the boundaries of your study, maximize the reliability of your findings, and avoid misleading or incomplete conclusions.

Therefore, if any aspect of your research design is flawed or under-developed, the quality and reliability of your final results and, by extension, the overall value of your study will be weakened.

Click here for detailed descriptions on the following design flaws. 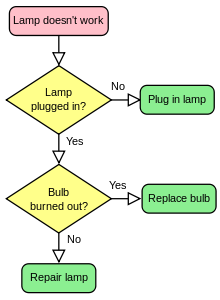 A flow chart is a "diagram that shows step-by-step progression through a procedure or system especially using connecting lines and a set of conventional symbols." [from Merriam-Webster.com]